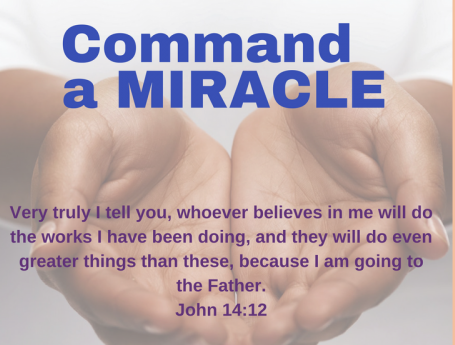 “Very truly I tell you, whoever believes in me will do the works
I have been doing, and they will do even greater things than these,
because I am going to the Father.” John 14:12

In God’s Kingdom, a promise is a promise. Words are not mere letters or throat sound, however, to those who understand the language of heaven, words are used to create, direct, command and change not only what we see in the physical but also the unseen. When we speak a word to anyone, we automatically expect a reaction. So it is with every spoken or unspoken word to God our Father, he hears and answers us.

There are 3 examples I would like to share on the topic of “command a miracle”. The first is the story of Paul and Silas Acts 15-17. These 2 men were so on fire for the Lord they turned the city upside down, they challenged the status quo and delivered a slave woman from bewitchment and soon enough they landed in jail. The bible then stated, “About midnight Paul and Silas were praying and singing hymns to God, and the other prisoners were listening to them. Suddenly there was such a violent earthquake that the foundations of the prison were shaken. At once all the prison doors flew open, and everyone’s chains came loose.” Acts 16:25-26

The second story is about the bleeding woman in Mark 5:25-34, the bible states, “And a woman was there who had been subject to bleeding for twelve years. She had suffered a great deal under the care of many doctors and had spent all she had, yet instead of getting better she grew worse. When she heard about Jesus, she came up behind him in the crowd and touched his cloak, because she thought, “If I just touch his clothes, I will be healed.”

The third is the story of Esther, the bible states, “Then Esther sent this reply to Mordecai: “Go, gather together all the Jews who are in Susa, and fast for me. Do not eat or drink for three days, night or day. I and my attendants will fast as you do. When this is done, I will go to the king, even though it is against the law. And if I perish, I perish.” Esther4:15-16

These stories have a couple of things in common, first, they were situations beyond man’s control and intervention. Second, they were very difficult times in the lives of the people involved. Third, they had a God in common, a God not made of wood or metal, the living God who answers prayers. Four, they all knew what they needed from God and this was not a guess work. Five, God was the only and last resort, there were no more options. Six, they believed in Yahweh, his word and promises. Seven, they had knowledge of the nature of God, and eight, each individual did something, there was an action that helped activate faith in there lives.

Commanding a miracle occurs when fear is totally eliminated and we dare to believe God for who he says He is. Esther would have known the God of Israel, her uncle would have told her about the God who opened the red sea for His people to walk on dry ground. The bleeding woman would have been following Jesus for a while, and seen the miracles he performed and she decided she had enough of her current state. She summoned courage, looked fear in the face and commanded her miracle. Paul and Silas were leaders who believed and spoke boldly about the gospel of truth – the good news that sets people free. They set the slave woman free in the name of Jesus and when it was there own turn to be set free, God sent an earthquake to the prison. The interventions were activated by faith; faith laced with divine instruction, prayer, fasting, agreement and action.

My dear friend, you and I have access to the same God today. God has not changed and His promises are live and active to those who believe. He is the same God from the beginning of time, he is a miracle working God. All creation bear witness to the supernatural intervention of God.

Command a miracle by believing in God’s word. To believe in God’s word, we must know God’s word. Time and again, bible stories confirm that when a desire is aligned with God’s word and in sync with a faith action, God commands a miracle.

Prayer:
Father, you are God of suddenly, the God of all flesh, touch me with your power and grace. I believe in the supernatural intervention of God. I believe in miracles. I command an atmosphere of miracles over my church. I will do greater things in Jesus name. Amen.